The third block of the year is when you are going to start turning all of those variations and volumes into some tangible progress you can see on the bar, in the form of more weight.  Block 3 still follows an undulating week to week plan with week’s 1 and 3 being more about total volume over the week using larger ROM lifts and high session volume loads to create a lot of muscular work.  This is juxtaposed with weeks 2 and 4 which have a higher frequency in terms of over the week but represent a higher average intensity and lower volume.  The use of more competition specific set ups also reduces the load this increases the overall intensity of the weeks.

Block 3 still follows an undulating week to week plan with week’s 1 and 3 being more about total volume over the week using larger ROM lifts and high session volume loads to create a lot of muscular work.  This is juxtaposed with weeks 2 and 4 which have a higher frequency in terms of over the week but represent a higher average intensity and lower volume.  The use of more competition specific set ups also reduces the load this increases the overall intensity of the weeks. 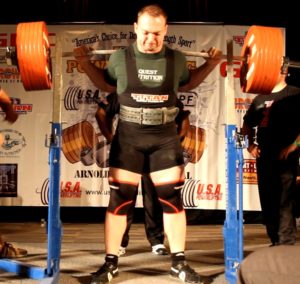 1 – The decrease in total lifts or volume from week 1 – 4 will allow you to reduce fatigue noticeably to the point where you should feel pretty strong in week 4.  This will be in essence a mini peak.

2 – The flip flopping nature in intensity should still allow you to maintain a more or less fatigued or “trained” state through the block which will allow you to not reach an actual peak which will make it easier to transition to another volume based training block.

We are also introducing the concept of rate of perceived exertion or RPE which has really been popularised by Mike Tuscherer of Reactive Training Systems.  The RPE is a great tool and one that has been latched onto by every “coach” or “trainer” who has a £9000 degree and 90p squat.  It get’s plastered into everyone’s training with little to no thought behind it’s implementation and it is a very useful tool and can be quite a powerful way of making progress it also brings in open variables which in training can be a fucking nightmare if they aren’t applied correctly or planned for in the training cycle. 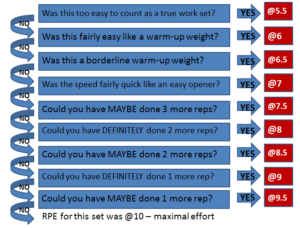 RPE Chart is taken from www.powerliftingtowin.com

Above you can see how RPE a scale of 1-10 is used in the context of how hard a working set is, you can refer to this on week’s 2 & 4 of the programme.  It might take a bit of effort to hone in what these numbers mean or actually feel like but with some practice, they are really reliable and have been shown to correlate well with objective markers such as bar speed.

There isn’t a massive difference between the use of RPE or percentages in a practical sense if the measure of maximum is accurate however when you get 8-12 weeks into a training cycle assuming the training is correctly structured and going well then the introduction of some open ended variables like RPEs or AMRAPs can help to assert where you are without having to do a 1 Rep max in training.  I personally prefer the RPE based heavier sets as they induce less overall fatigue to the lifter and are also far more specific to the demands of a 1 RM or powerlifting as a sport. 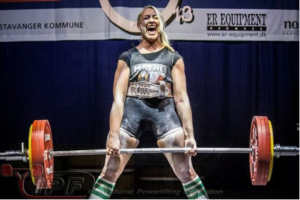 The Goals of this Block Are –

Where is the overload coming from in this block? 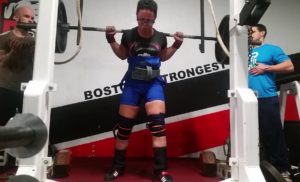 Week to Week layout of the block

As you can see comparing the volume of block 2 (February) vs block 3 (March) you can see this block actually starts with a net higher volume than block 1 but drops down to less over the back end of the block.  This is what I was talking about earlier re: the more linear nature of the block.  You will also see there is little difference in average intensities however this doesn’t account for the open-ended RPE based sets which will push this number up.  Looking at the plan in this more global

Looking at the plan in this more global sesne (week to week) you can also see how unregulated open-ended training might be a bad thing as you can’t plan or adjust for it precisely you can only make educated guesses about how it will affect fatigue levels which IMO is a strong argument for these methods to be used sparingly and in a definite context.

Week 1 – intro block this represents the highest levels of volume in the programme with the lowest intensities this is a preparation block to build up some work capacity and to provide a bit of a deload from the intensity.

Week 2 –  the first “overload” block based off 5×4 @ 80% of maximum which gives an intensity by number of lifts of 1 which is a good stimulus and not too intense, spread over 2 sessions this on it’s own will give a good strength stimulus.  The addition of open-ended sets based off RPE allows the lifter to apply more stress based off intensity and to also get a better idea of where they are at.

Week 3 – is similar to week 1 but with less total volume and a higher average intensity.

Week 4 – is again similar to week 2 however it uses a higher intensity for it’s planned loads 5×3 @ 85% which again provides an intensity by number of lifts of 1.  The decrease in total volume however in week 3 and 4 will allow the lifter display their strength better so this should result in some personal bests even if not achieved in week 2.  This will allow the lifter to readjust numbers going forward into the next Mesocycle.

Get your copy here –